Updated on Mondays to Help Start Your Week Off Right!
(and recipes updated whenever I get a chance) 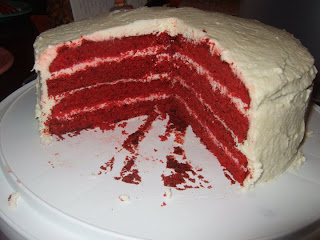 This cake is awesome.  Especially with the traditional roux-based frosting.  I first had red velvet cake with cream cheese frosting and thought it was pretty good.  Then I tried it with the traditional frosting and was blown away.  There's a reason it's the traditional frosting for this cake - it's the perfect complement to the cake.  I usually cut each cake in half long-ways to make a 4-layer cake.  That means you have to increase the frosting by about 50% to have enough - but it's worth it.  Sorry about this terrible picture - I haven't made this cake since I learned how to take decent pictures of food.  Guess that means it's about time to do it again!

This makes a fairly large cake; probably at least 12 servings.

2 1/2 cups sifted cake flour (sift flour once before measuring, then sift again with the other dry ingredients, as called for in the recipe - if you don't have cake flour (but it's totally worth it, so just buy a box), you can use all-purpose instead, but measure out the 2 1/2 cups, then remove 5 Tbsp from it to get the accurate substitution amount.)
1 tsp baking powder
1 tsp salt
2 Tbsp cocoa powder (unsweetened)
2 oz. red food coloring (I've also just used 1 oz before, and it worked just as well, or close enough)
1/2 cup unsalted butter, at room temperature
1 1/2 cups sugar
1 egg & 2 egg yolks, at room temperature
1 tsp vanilla extract
1 cup buttermilk, at room temperature (if you don't have buttermilk, you can substitute sour milk instead - put 1 Tbsp lemon juice in a measuring cup, then add enough milk to equal 1 cup, total.  Stir, then let sit for 5 min = instant "buttermilk.")
1 tsp white vinegar
1 tsp baking soda

Preheat oven to 350.  Butter and flour two 9-inch round cake pans (or three 8-inch rounds).  I usually butter the entire inside (bottom & sides), then use a parchment round (or you can cut parchment paper into circles to cover the bottom of the pan), then butter the parchment paper, then flour the entire inside - I know it sounds like a lot more work, but it ensures your cake won't stick!

Sift together the cake flour, baking powder, and salt into a medium bowl; set aside.  In a small bowl, mix food coloring and cocoa powder to form a thin paste without lumps; set aside.

In a large bowl (bowl of a stand mixer), beat butter and sugar together until light and fluffy, about three minutes.  Beat in egg and egg yolks, one at a time, then beat in vanilla and the red cocoa paste, scraping down the bowl with a spatula as you go (watch out, because you're pretty much guaranteed to get red food coloring on at least one thing - I highly recommend wearing an apron!).  Add one third of the flour mixture to the butter mixture, beat well, then beat in half of the buttermilk.  Beat in another third of flour mixture, then second half of buttermilk.  End with the last third of the flour mixture, beat until well combined, making sure to scrape down the bowl with a spatula.

Make sure you have your cake pans buttered, floured, and nearby.  In a small bowl, mix vinegar and baking soda (it will fizz!).  Add it to the cake batter and stir well to combine.  Working quickly, divide the batter evenly between the cake pans and place them in the preheated oven at 350 degrees.  Bake for 25-30 minutes, but check early (20 min or so) - the cake is done when a toothpick inserted in the center comes out clean.  When cakes are finished baking, turn the oven off, crack the door slightly, and let the cakes sit in the oven for about 10 min.  This helps keep the tops from sinking.

Cool the cakes in their pans on a wire rack for 10 minutes, then removed cakes from the pans and let them cool completely.  Then I cut them in half long-ways to make 4 cakes.

3 Tbsp flour
1 cup vitamin D/whole milk (too runny if you use anything else)
1 cup butter, at room temperature
1 cup sugar
1 tsp vanilla

Cook flour and milk in a double boiler (or pyrex bowl placed over a pan of simmering water), until thick, stirring constantly.  It will get really thick - almost like toothpaste.  Cool.

Cream sugar, butter, and vanilla in the bowl of a stand mixer until as fluffy as possible.  Blend cooked mixture with creamed.

The frosting must stay refrigerated, as it will fall apart at room temperature.

This recipe also makes great cupcakes - fill liners 3/4ths full and bake for 10-15 min, or until toothpick comes out clean. 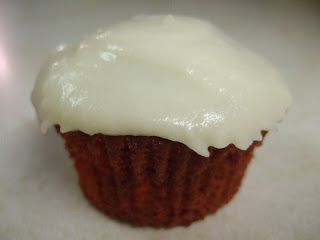 I've also tried red velvet cake balls - they were awesome, but almost too rich.  Even for me, and my blood is pretty much made of sugar.  In a not-diabetic way. 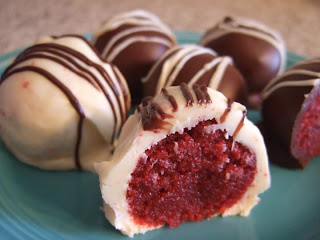 And finally, Purple Velvet Cake!  I only had gel food coloring, not liquid, so the color didn't come out as richly as I'd hoped.  Next time I'll hunt down the liquid stuff and get it right. 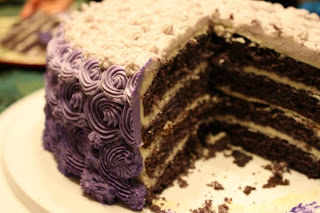 Or Just Read My Ramblings

Take a Glimpse at My World...

I chose the title for my blog as a pun intentionally, and not just because I really enjoy puns. Not only do I wear fuchsia-colored glasses (and the blog is heavily a narrative of my various experiences and world views through said glasses), but it's also a play on the old "rose-colored glasses" saying. Things really do seem a little different, albeit better, in my world than reality (usually with more rainbows, singing, and friendly wild animals who want to be my friends - imagine living in a box of Lucky Charms on acid). The majority of my experiences stem from this colorful outlook, combined with a nearly crippling anxiety disorder, as well as an ability to be incredibly naive and, oftentimes, outright oblivious. As Husband likes to say, I'm the stupidest smart person he's ever met.